Descartes had this epitaphial motto: «He who lives hidden, lives well». I might be extrapolating right here, and there’s a high chance of that, but the guys in The Body are perhaps trying to find (illusory) shelter from life’s condemning emptiness in art, noise, sarcasm, schadenfreude, noise, compagnons de route who understand them musically, mockery, more noise and more sarcasm. Hiding themselves in sound to make everything more bearable, because he who lives hidden, lives not so miserably.* And they’re about to release the «grossest pop album of all time» on Thrill Jockey, to unleash a Full Of Hell collaboration on Neurot and to tour Europe [Roadburn and Portugal included] with the boys in FOH too. Enough motives to speak with Lee Buford – one-half of The Body. 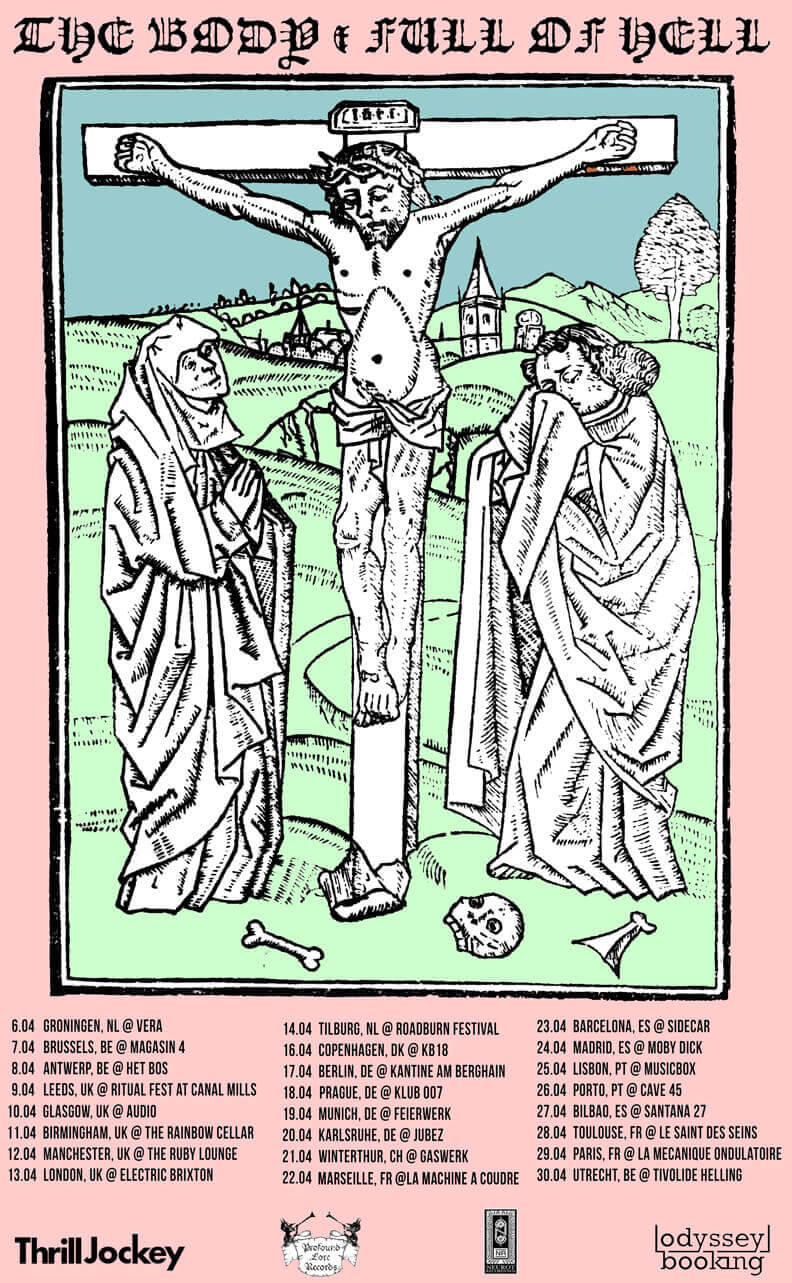 *But what do I know?

First things first: would you go for a Metallica collaboration in this “what if” scenario where Lars gets in touch with you to make it happen? Take into consideration that Metallica’s last partnership ended up with “Lulu”.

I mean, I’m sure we’d do it just for the novelty of it, but I honestly don’t think anything remotely good would come out of it musically.

There’s this detail beyond music that I enjoy pretty much in The Body: your t-shirts’ design. Black humor, quotes from French movies from the 60s; all carrying a tongue-in-cheek nihilistic undertone. Who usually comes up with the ideas?

We both kind of come up with them. Most of the quotes are just like how we do samples on the records. Whatever we’re reading or watching, if something speaks to us, we’ll write it down and we have a kind of backlog of quotes and samples.

Perhaps ‘fun’ isn’t the appropriate word here, but The Body has this sarcastic sense of humor, which is self-deprecating at times. I remember following your FB updates on your last tour with Full Of Hell and they were just great. I mean, you take your music seriously but you don’t seem to take yourselves seriously at all. Is sarcasm an essential element in The Body? To avoid having this useless egotistical pretentiousness?

Well, we’re both pretty miserable people, I’m on a variety of antidepressants and anti-anxiety meds, but we’ve always been like that. I think our sarcasm and humour is how we deal with trying to get through life. Also, while we do put very very personal stuff into the music and everything about our aesthetic, we also understand that we are just two dudes playing music, just like a million other people in the world. I see people take their bands so serious and it’s honestly the grossest thing in the world… If I have to see another video of “spooky” dudes trying to look tough while playing some rehashed Mastodon shit, I might go snakehouse on the entire world. So, yeah, us making jokes and stuff is us trying to distance ourselves from the bands that think they’re somehow special, because they got a record out on whatever doodoo label people think is relevant in 2016.

You’re not particularly fond of society. Elements such as pain, boredom, violence, depression, escapism are recurrent in your music. I remember this Prurient interview where Dominick says his music is not cathartic at all, because catharsis means letting go of something. You, as well, do not seem to let anything go or to experience relief. With every new record, there you are again mutilating yourselves with these sounds of torture.

Chrissy (who is my best friend along with Chip) calls me out on that a lot. but I think there’s something cathartic in owning your sadness. Also, I’ve had issues since as long as I can remember so honestly I don’t know what it’s like to not be like this. I think there are a lot of other people out there who feel the same too and if any of those people can feel a fraction of how I felt reading Sylvia Plath when I was a kid, and realize I wasn’t alone, then I’ll feel like I actually did something with my life. I mean, I’m sure we could be a lot more “successful” if we had lyrics about wizards or mystical shit instead of songs about complete loneliness and suicide, but Chip would probably drive the van off a bridge if we were living in that world.

Beyond being a fan, is there something that you search, and want to find, in the people with whom you collaborate? Beyond musicianship?

Well, for the most part, we’re friends with everyone we’ve collaborated, so they know what we’re about and we know what they’re about. But we also look at the collabs as a different thing. When we do solo records we have a pretty good idea of the themes we’ll be touching on, but with the collabs it’s more loosely based due to how many people are working on the same thing.

You’ve described your next LP as being «the grossest pop album of all time». I’m not expecting to hear The Body playing some funkiest hooks capable of granting you some airtime, but, well, I can’t avoid being intrigued by that quote.

Well,  we listen to a lot of really radio pop stuff, but we also hate most modern music. So we also listen to really lo-fi noise stuff, so it’s kinda the marriage of those two ideals. I mean, it’d be great if we could make just a straight pop album. Believe me, that would be a dream come true, but look at us, we’re animals. We couldn’t pull that off. So this is our sad attempt at it.

Is there someone in pop music that you would love to collaborate with?

You’re lumped within metal circuits, metal festivals, metal shows, metal everything, but there’s not that much in common between The Body and most metal acts out there, including those who are called ‘sludge, drone, doom’ and stuff. Do you find it when you are paired with, for example, the stereotypical “amplifier worshippers”?

It’s a real curse for us. There’s about 1% of metal that is remotely interesting to me, so having to play with bands like that is our own personal hell. When we started, we had Sunn amps and a bunch of cabs, but it was to make up for their only being two of us. And Sunn stuff was just way cheaper, so now we’re trying to get rid of all that, so Chip doesn’t have to talk amps for two hours after every show. But being on Thrill Jockey and doing the record with the Haxan Cloak has really helped us kinda break away from the metal world we were kinda stuck in.

There’s this American comedian called Doug Stanhope who says that Portland is his favorite  city because it is like the dirty old whore of the US, who knows all the lowlife secrets: booze alleys, places to score good drugs, etc. Do you feel the same vibe coming from it? Did the move to Portland ended up influencing your music? I.e., growing your despise for most people.

It’s tough. Moving from Providence, where everyone is doing all this really crazy stuff in every kind of medium, to get to Portland was real hard to get used to. Portland is a really easy town to live in, so artistically it’s pretty lackluster. There’s a reason the best punk bands existed under Thatcher and Reagan. It gave people a reason to be pissed and they needed to have some control in the midst of a shitty world. Portland is the exact opposite where it’s hard to be pissed when you can get something vegan at every restaurant and there’s a club or dance night or something that’s catered specifically to whatever you’re into.  It also makes for a very fractured scene when everything can be so specific and separated. Providence is a very small town and it’s a hard town to live in, so it makes everything better because you have to fight for it.  The music scene is untouchable because there’s no division between things. Everyone hangs because it’s a small town and the normal new Englanders are terrifying. The freaks gotta stick together.

You’re now reading two things with Full Of Hell: an European tour and a record. When I talked with Dylan Walker, he said: «The Body in particular might be my favorite contemporary band, period». What do you think about the boys in Full Of Hell when it comes to musicianship, that makes them stand out?

I love them. I talk to Dylan and Spencer probably everyday.  The thing I love about them is that they try to push themselves creatively, which is a huuuuge thing that gets overlooked in music a lot nowadays. Plus, it’s really good! Which is really hard to accomplish, to make something original that’s also very listenable.  It also helps that they’re all the best people, even though Spencer wouldn’t stop talking about Hawthorne Heights while we were recording.

I guess your flight fright is still a real thing. Are you choosing the boat to visit us this Spring?

Naw, the boat didn’t work out last time. They had to like evac me off it about two hours out. it was pretty crazy. I can barely get through life as is, so when you throw a big variable like that in there, I guess my weak ass brain can’t take it. Our really good bud Zac, from the band, Braveyoung is gonna play.  He plays very similar to me but a lot better, so Europe will get the best version of The Body that’s available.

This is like a post-scriptum-question but do you know what happened to the Sandworm guys? Their split with you is fucking amazing and I’ve not heard of them since.

Ben [Eberle] is on our new record doing vocals. They also just recorded a new record that is KILLER, we made a tape with Ben called Narrow Pathe that Stevie Floyd and Jef Whitehead did vocals for. Ben also has a band called Clean that is so fucking good. I don’t wanna build Ben‘s ego up too much because I don’t want him to realize he’s better than us and stop being on our records, and then he’ll stop playing Destiny with me every night. But he is a real musical genius.